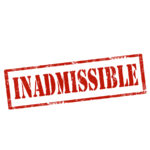 How Do I Show Evidence of Psychological Hardship?

If you have been found to be inadmissible to the United States for unlawful presence, misrepresentation, and/or a crime involving moral turpitude, you need an approved hardship waiver/immigration waiver in order to become a lawful permanent resident of the United States. The hardship waiver explains how your qualifying relative (typically your U.S. citizen of lawful permanent resident spouse or parent) will suffer if you cannot reside in the United States. There are three kinds of hardship factors considered: psychological, physical, and financial.

It is essential that any claim of hardship that your qualifying relative will suffer is supported by evidence. For physical and financial hardship, this evidence is often a collection of medical records and financial records, which should be easy to obtain and provide with your waiver application. Psychological hardship evidence, however, is a bit more difficult to show. Here are three examples of how you can show psychological hardship evidence in a waiver application:

Contact an experienced waiver lawyer today for a FREE 60 MINUTE CONSULTATION and see how we can help solve your complex immigration issues!